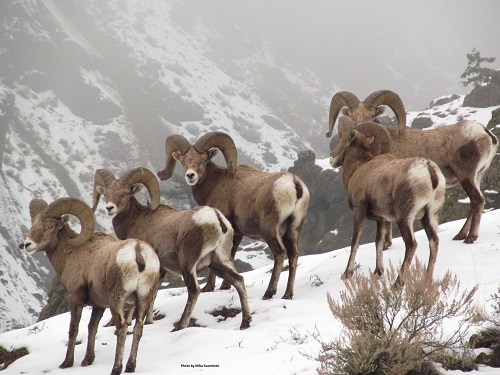 Clinton, B.C. January 2016. When wild sheep come into contact with domestic sheep wild sheep die.  For nearly a century wild sheep in B.C., and all across North America, have experienced massive die-offs due to interactions between domestic and wild sheep.  Domestic sheep, goats and even lamas carry pathogens which they are immune to, but are deadly to wild sheep.

Wild and domestic sheep need to be separated

Domestic sheep no longer graze on crown lands, which historically was a major cause of bighorn sheep population die-offs.  Currently most interactions happen on farms adjacent to bighorn sheep range in the fall when wild sheep rut.  Parts of B.C. such as the Cariboo, East Kootenay, Okanagan, and Thompson are all areas of high risk.  In Northern B.C. Thinhorn sheep are naïve to the pathogen, never having been exposed – the risk of widespread population die-offs is extreme.

The BC Wildlife Federation, Clinton and District Outdoor Sportsman Association, guide-outfitters of the Thompson, the Wildlife Stewardship Council and the Wild Sheep Society of BC are hosting a town hall in Clinton to educate the public on the risks to wild sheep.  Subject matter experts are being brought in to share the history, science and experiences in regards to wild-domestic sheep separation.

Once a wild sheep contracts the bacteria from domestic sheep they often die within days, but not before passing the bacteria on to other sheep in the population.  This can have a cascading effect through adjacent populations which results in wide-scale die-offs.  In 1999-2000 a die-off killed approximately 65% of bighorn sheep in the South Okanagan.  It often takes a decade or more for sheep populations to recover; some populations never recover.

The Chasm sheep population has declined from over 110 in the fall of 2013 to 28 animals.  Four samples were taken and 50% of the sheep tested positive for the antibodies related to pathogens carried by domestic sheep.  There is a history of interaction between domestic and wild sheep in the area and wild sheep have suffered.  With other uninfected wild sheep populations both west and east of the Chasm sheep herd the results could be devastating.

We need your help to protect these local sheep herds, join us and become part of the solution!