The WSSBC could not be successful without the passionate commitment of our volunteers, and Partners in Conservation. 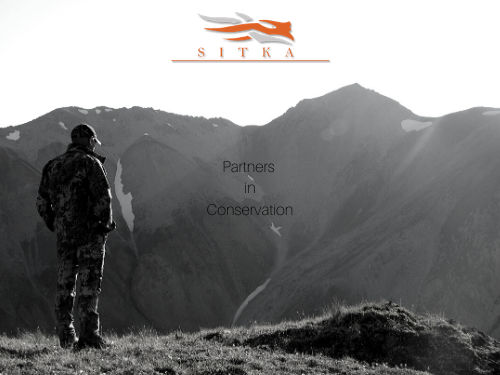 The WSSBC has contributed funding for the first year of this three-year project to assess the Fraser River Bighorn herd. To date, this is the largest amount the Society has invested on a single project. The goals of this project are to collect baseline herd health data to understand the prevalence of Movi in Fraser River bighorn sheep herds, assess connectivity and the subsequent risk of Movi transmission among herds through the movements of GPS collared animals, and define seasonal ranges and migration corridors. The first year of this project will be focused on bighorn herds on both west and east sides of the Fraser River corridor in Region 3, with plans to expand the study area into metapopulation herds as far north as the Junction sheep range in Region 5. 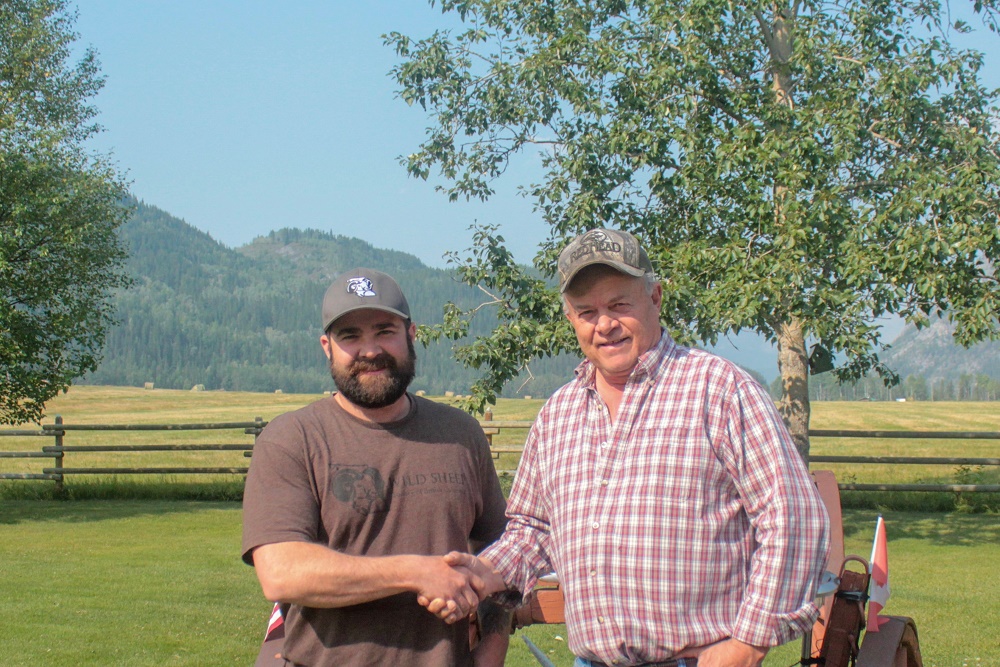 Summary:
The WSSBC has contributed funds to help support the 2018 Salting Program along the Alaska Highway in Northern BC. Sheep are attracted to the highway year round for the salt applied during the winter months. This project aims to reduce or eliminate vehicle collisions with Stone sheep along known areas of the Alaska Highway. Thirteen remote lick sites have been established and maintained in an area between Summit Lake in Stone Mountain Provincial Park and the Liard River along the highway. Location sites were carefully selected to provide escape terrain, and are screened from view of the highway as well as within the one mile no hunting corridor in effect throughout the Provincial Parks in attempt to intercept the sheep prior to them going to the highway as a source of salt. 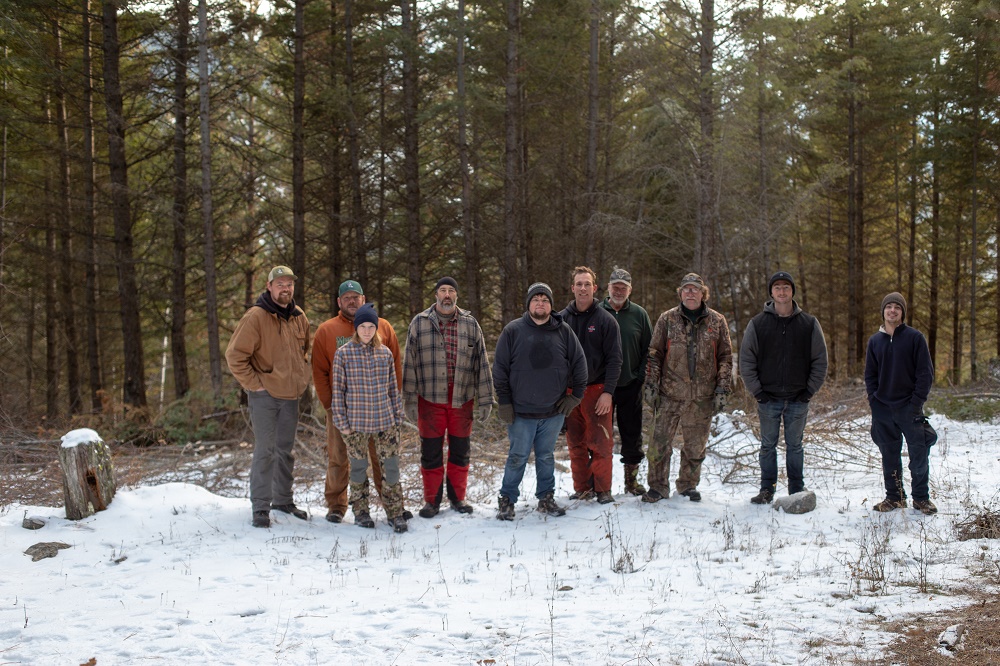 Through the generous contributions of the Wild Sheep Foundation Grant in Aid program and Iowa FNAWS we secured funding to complete 50 ha of thinning operations in critical sheep habitat that had been overgrown and infilled through the last 100 years of fire exclusion. This allowed us to acquire another $50,000 from the provincial government which will enable us to thin at least another 50 ha this spring. In total, we anticipate having over 100 ha to burn in 2019. There has been unprecedented collaboration between the provincial government, First Nations, local government and forest licensees on this project that will create future opportunities for continued work of this nature throughout the province. Our members and supporters also volunteered their time to participate in this slashing project. These thinning projects are the best opportunity for our members to actively participate in wild sheep conservation projects and we look forward to doing many more. 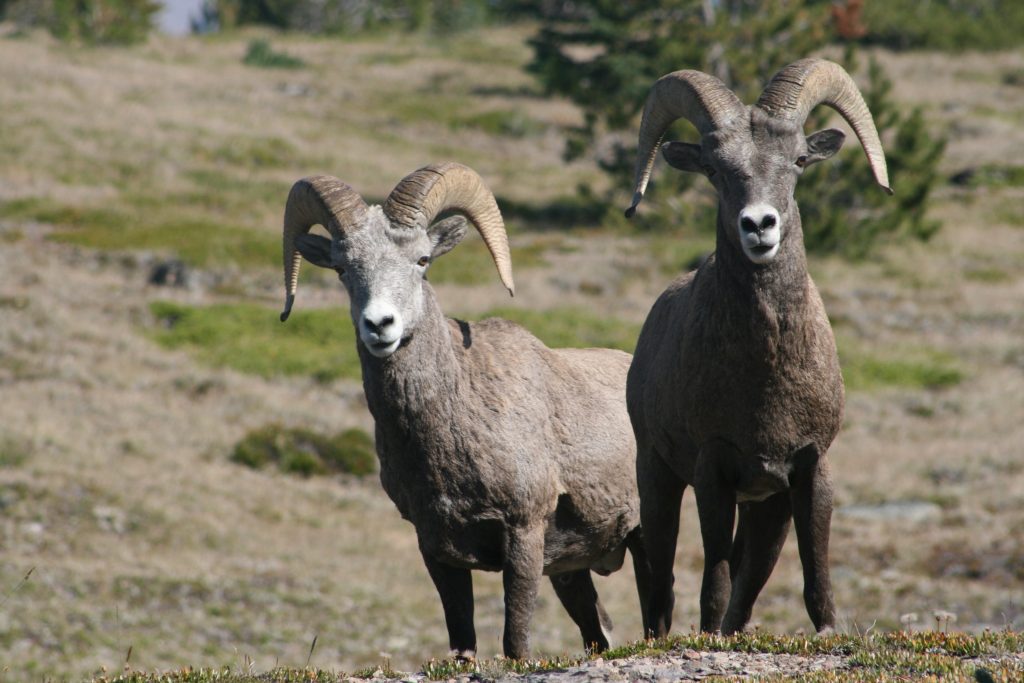 WWSBC has contributed funding towards an ongoing UBC-Okanagan bighorn sheep study. The goals of this project are to discover the interactive effects of carnivores and parasites on prey: Psoroptes ovis(P. ovis) mite infestation of California bighorn sheep exposed to cougar predation in the Okanagan Valley. Bighorn sheep will be captured and GPS collared on both sides of Okanagan Valley to determine the effects of the mites on sheep mortality. Since the 2011 discovery of P. ovis in the Okanagan, sheep populations have declined by 60%. This research will help wildlife managers in British Columbia understand the proximate causes of mortality for sheep, while also creating a tool to help recognize the pattern and result of disease transmission for a population. 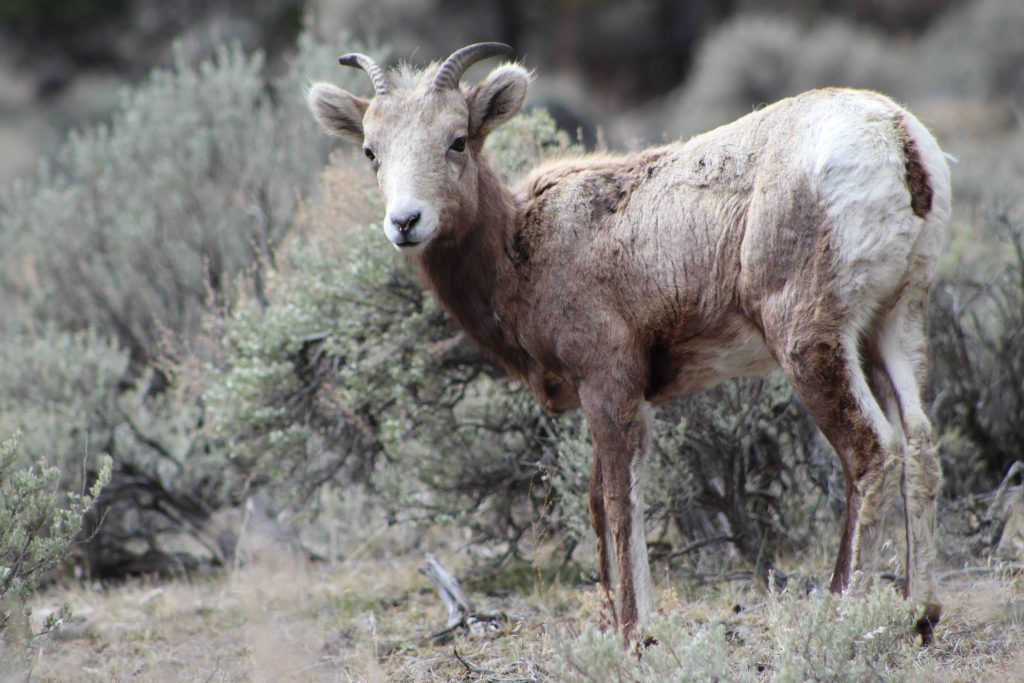 The WSSBC has contributed funding for the first year of this three-year project to assess the Chasm Bighorn herd. The goals of this project are to stop pathogen (M.ovi) transmission to lambs from surviving Chasm ewes, prevent pathogen transmission to adjacent herds, and ultimately recover population of Chasm bighorns. In 2013, we seen a significant decline of the Chasm herd from 100 animals to 25. Co-mingling with domestic sheep was directly observed and (M.ovi) antibodies were detected. Since the 2013 decline, lamb recruitment within the Chasm population has been very poor. The domestic sheep on the farm where contact was suspected have now been sold and no sheep remain on this particular farm. In an effort to reduce exposure and transmission of disease, testing and removal” of the entire affected Chasm herd is planned. This will be accomplished in the winter of 2018 following the rut on winter range where they are already habituated to domestic forage and are in conflict with a forage producer. All animals that are handled will be marked and we will deploy 5 more GPS collars to track movements, potential connectivity with nearby herds, and to assist with locating animals during survey flights. Five collars were recently deployed on the Chasm herd in the spring of 2018.

The key measure of success for this project will be an increased lamb recruitment following the targeted removal. We will evaluate this measure through lamb surveys conducted in early spring and late summer. During these survey seasons, Chasm bighorns are fairly predictably occupying range that is easily viewable from the road. We will also incorporate survey data recorded since the 2013 decline. 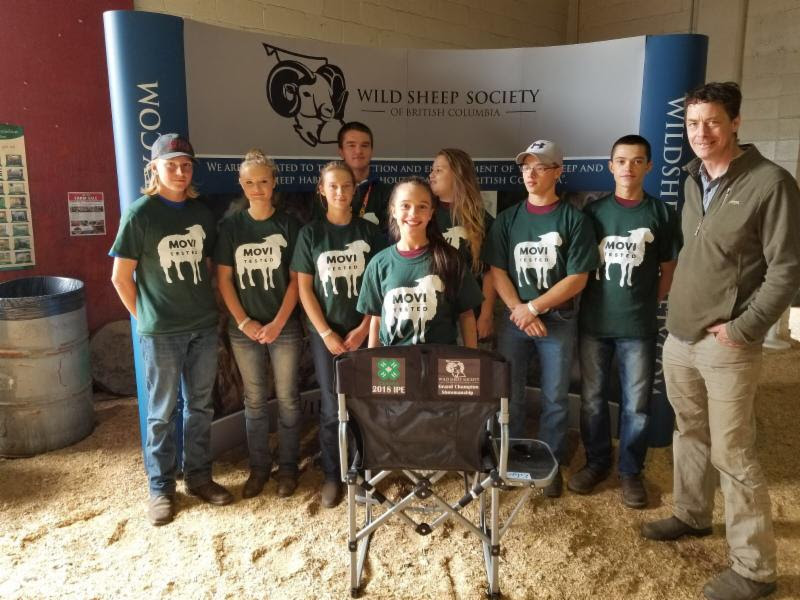 The WSSBC contributed funds to a first-of-its kind project in support of a local 4-H lamb club at the 2018 IPE Fair. This was a great opportunity to build relationships between wildlife conservation and the agriculture community, by promoting an understanding of the risk of respiratory disease transmission between domestic sheep and goats and wild sheep. The Wild Sheep Society had a display set up and was in attendance over the five days of 4-H lamb shows and demonstrations and was recognized as a major sponsor of the event. A public auction to sell the 4-H lambs was held on the final day of the fair, with the Wild Sheep Society bidding on three lambs that had been raised Movi free as a result of an earlier partnered project with local 4-H kids. Many people in attendance were not aware of the respiratory disease risk between domestic sheep and goats with wild sheep, and were eager to learn more. The involvement of the Wild Sheep Society at this event was very well received and all feedback was positive.

Funding and support provided by:
Wild Sheep Society BC
BC Sheep Separation Program 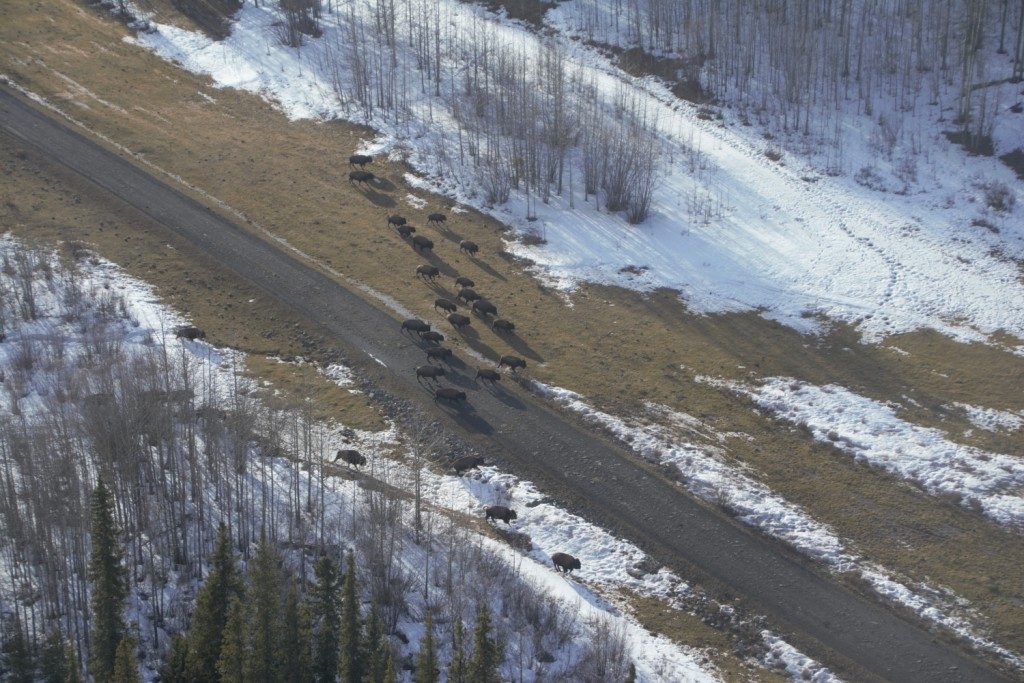 The WSSBC contributed $5000 in funding for an aerial survey of bison that was conducted in March 2018. The objectives of the survey were to delineate current herd range, re-assess harvest management strategy, implement a management strategy to prevent further range expansion, limit interspecific competition for forage and habitat. The objective of reducing overlap between bison and stone’s sheep at higher elevation, was a compelling reason to support this survey.

FLNRO conducted an aerial survey of the northernmost edge of the zone to record bison locations in February and/or March 2018. This was a minimal count and the focus was on gathering spatial data. After completion of the survey, FLNRORD mapped and analyzed the data. FLNRO is to engage with relevant stakeholder groups to develop a management strategy to be endorsed by the regional and the Wildlife Branch directors. Expected implementation for the no-bison zone could be as early as 2019. For the LEH changes, FLNRO expects implementation before the start of the 2018-2019 hunting season. 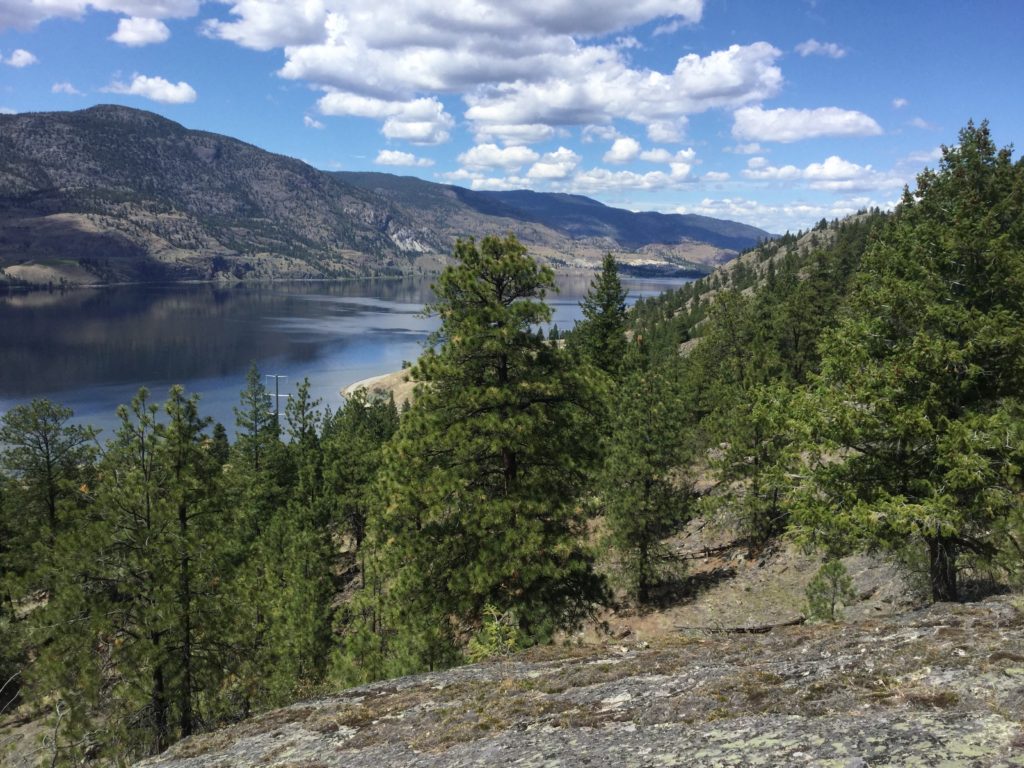 The WSSBC contributed funds to support the purchase of an 87.5 acre parcel of undeveloped land on the east side of Skaha Lake, near Penticton. This property will be set aside, protected from development and maintained as a grassland ecosystem in perpetuity and is located adjacent to the McTaggart-Cowan Wildlife Management Area, effectively expanding protected bighorn sheep habitat. The parcel consists of open grassland with ponderosa pine and Douglas fir stands with ample steep escape terrain. The parcel will be managed as bighorn sheep habitat by improving connectivity and sheep movement within the adjacent protected areas. 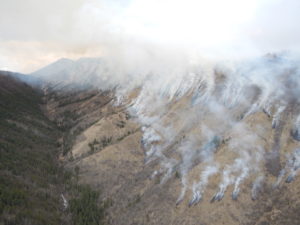 The Wild Sheep Society of BC contributed $25,450 in funding towards a prescribed burn along the Tuchodi River, in Northern BC. Funds acquired for this project were the result of the inaugural Northern Fundraiser held in February 2017 in Dawson Creek, BC. The Tuchodi River valley has a long history of prescribed fires; however, burns have not been conducted in the valley since 2007, and sheep-specific burns have not been done since the late 1980s. The lack of burns has resulted in poor winter range quantity and quality for Stone’s sheep. Approximately 2,000 hectares of sheep habitat has been enhanced along the Tuchodi River through this prescribed burn. The burns were conducted in late May of 2017 via helicopter ignition at 11 locations. 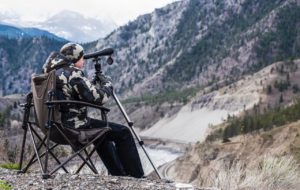 Every year in early April volunteers gather in Spences Bridge to conduct a ground based survey of bighorn sheep habitat. 13 survey zones are observed by volunteers to scout for bighorn sheep and record their findings. This data is used for long term population trends and overall population health. Typically, over 200 bighorn sheep are observed during the one-day survey. The information volunteers collect is valuable for determining lamb recruitment, an important metric in determining the health of a population. Sex and age-class ratios are also important for understanding long term population trends. Thanks to the support of volunteers this information can be collected and used by Regional Biologists to inform management decisions. The Spences Bridge Sheep Count occurs in early April of each year, ensure your membership is up to date so you don’t miss out. 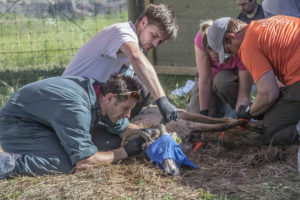 Dr. Adam Hering is leading the Psoroptes Treatment Trails in Penticton, BC with collaboration with the local Penticton Indian Band. Capturing and handling the bighorn sheep has given an opportunity for many students and research supporters to get hands-on opportunities to handle wild sheep and contribute to the experiment. This research could not have been accomplished without the help of numerous volunteers and hundreds of volunteer hours. The preliminary findings suggest that a single treatment has not been effective in clearing the bighorn sheep of their psoroptes infections. However, it appears that the treatment has likely resulted in reducing the severity and symptoms associated with infection. Valuable information is being collected from the lambs on how early they can become infected with this parasite. Mites have already been found in the ears of two of the lambs even though none of them are showing clinical signs of infection. A subset of the lambs has been treated to see if it can be effective in treating early infections and protecting lambs from infection. At this point other drugs that may be useful in treating this disease are being actively pursued and discussed.

One of the main functions of the WSSBC is to provide funding, manpower and leadership for a variety of projects and initiatives geared towards enhancing wild sheep populations in BC. Often these are completed working closely with our partners in conservation. Click on the links below for completed projects.

Completed Projects and Funding:
Click the links below for the documents. Adobe PDF format.