The Second Annual Jurassic Classic was held on the Fraser River in beautiful Chilliwack, British Columbia August 19th through 21st, 2017. The weather was perfect, fishing was good, and WSF Chapters and Affiliates raised much needed dollars for wild sheep conservation. This event saw people travel from all across North America to participate in friendly competition, camaraderie and lots of laughs.

The Wild Sheep Society of British Columbia, as one of the hosts of this event, welcomed 28 teams of 2 anglers to our great province. This event is a fundraiser for wild sheep conservation and all funds are put into on the ground projects in BC. 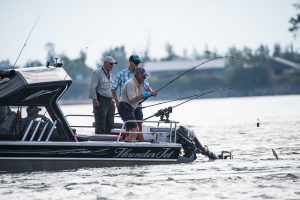 A number of big sturgeon were landed during the weekend, however it was Jack and Stacy Loureiro that earned bragging rights as the 2017 Jurassic Classic Champions. Guided by Chuck Grant. Jack and Stacy anchored an 8 foot 7 inch white sturgeon. 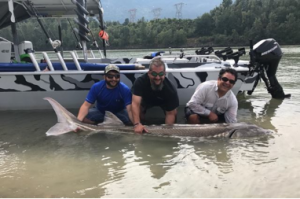 The 2018 Jurassic Classic will be hosted again in beautiful Chilliwack, British Columbia on the weekend of August 17th – 19th. Due to the popularity of the event most teams have already been sold, however a limited number are still available.

For those individuals in the Alberta area, you can get your team through:

If you are interested in learning more about the event, you can contact the Jurassic Classic organizing committee at jurassic.classic.bc@gmail.com. You can also visit jurassicclassic.ca for additional information.

The 2017 Jurassic Classic Gold Sponsor, Wholesale Sports generously donated prizes and merchandise to the event. Ten thousand dollars in prizes was handed out to tournament attendees throughout the weekend.