The Wild Sheep Society of BC hosts the annual Spences Bridge Sheep Count in early April of each year, volunteers dust off their binoculars and spotters and make the journey to Spences Bridge to locate, identify and record bighorn sheep. This ground-based population inventory provides an estimate of total abundance and an index of the sex and age composition of the population for the bighorn sheep located between Lytton and Cache Creek, British Columbia. 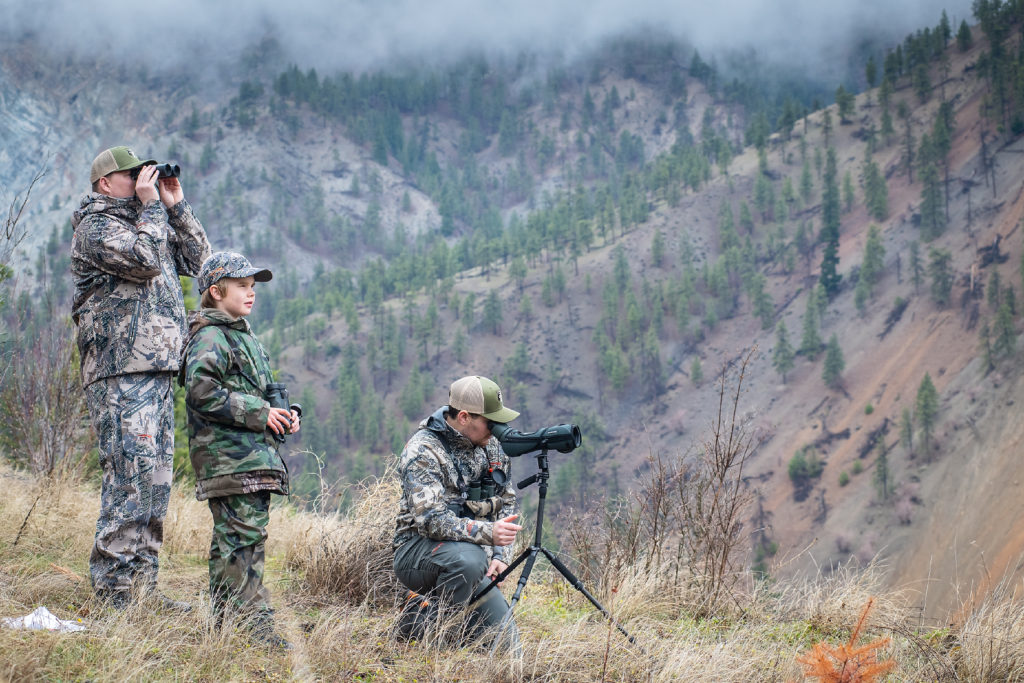 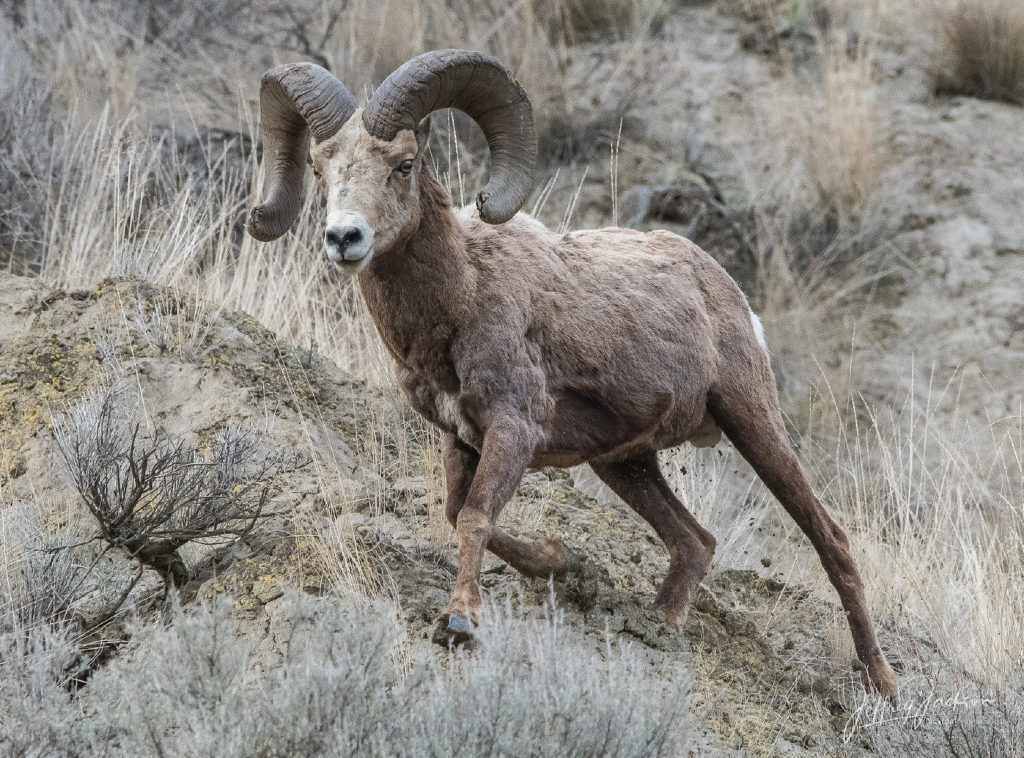 On April 7th, 2018 over 70 passionate sheep hunters and conservationists descended on the Lytton-Cache Creek corridor to glass for the elusive bighorn sheep for the annual Spences Bridge Sheep Counts. Prior to the count, volunteers and team leaders were assigned one of the 13 survey zones and team leaders were issued the maps, data sheet and instructional information. Volunteers made the journey from all over the province to take part; volunteers from Golden, Quesnel, and as far as Vancouver Island made the long journey to take part in the counts. The bulk of the volunteers travelled up from the Fraser Valley and Lower Mainland. 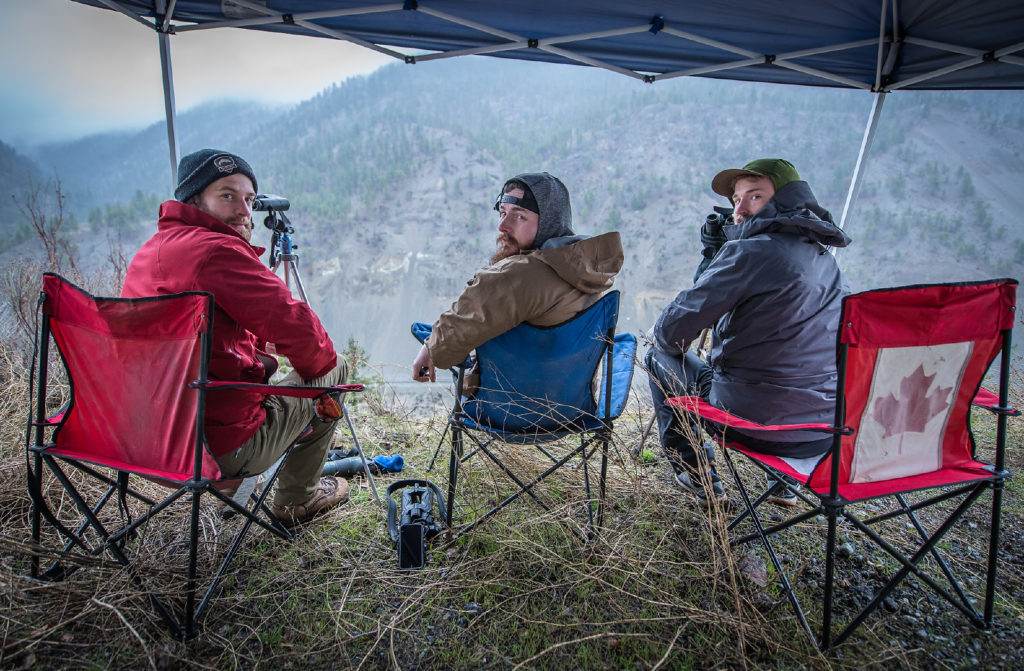 Groups were provided all the information they needed to start locating and recording sheep on the morning of the count. Several groups were on location for first light, to take advantage of those early morning movements. The weather conditions in the morning hours were sub-optimal, with rain and low-lying fog in the valley. Conditions would improve throughout the day as the fog lifted and the rain subsided. Spotting bighorn sheep was particularly difficult in the morning due to the weather and the limited mobility of the sheep. Volunteers were forced to pick apart the landscape in search of bedded sheep, not an easy task in the cliffs and treed landscape. 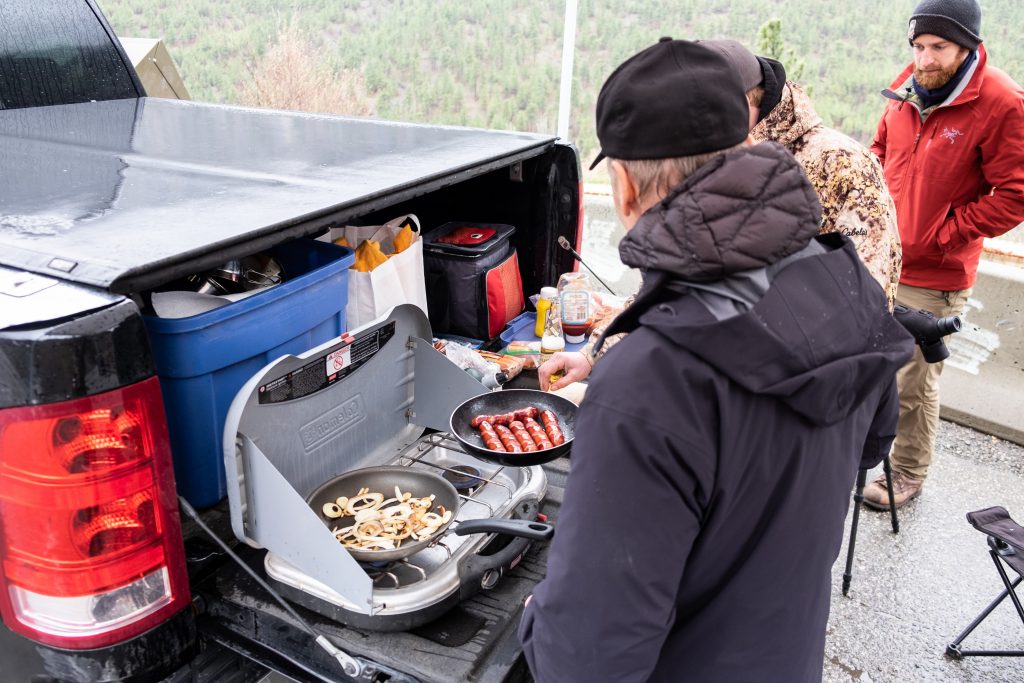 Spotting scope, binoculars and a sturdy chair are the essential gear needed for the sheep counts. All are welcome at the sheep counts and volunteers brought the optics they had, however, the volunteer who brought out the Swarovski BTX seemed to make the most friends, with undoubtedly the most advanced sheep counting optic ever made. Some groups were set up with a full-on tailgating setup, with fresh French-pressed coffee in the morning, the barbeque grilling up lunch and a cooler full of cold drinks. Groups dealt with the rain using various approaches, some threw on the raingear and toughed it out, others were glassing out the windows of their parked vehicles and the most prepared groups had pop-up shelters to hunker down under to avoid the liquid sunshine. 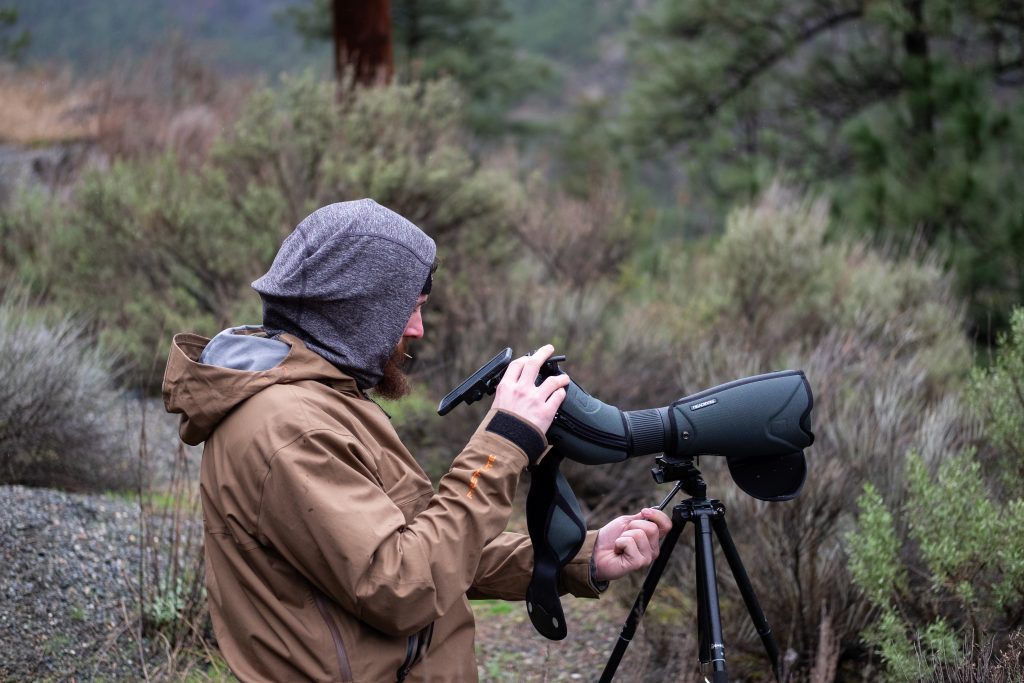 A total of 70 rams were identified, including 4 mature (Class IV) rams. A total of 250 bighorn sheep were identified during the survey, which included 137 ewes, 37 lambs and 6 unclassified adults. The lamb: ewe ratio was 27:100. The adult sex ratio was 51 rams per 100 ewes. The difficult conditions resulted in fewer sheep spotted compared to the previous year, however, the total number of sheep appears to be consistent with previous years. 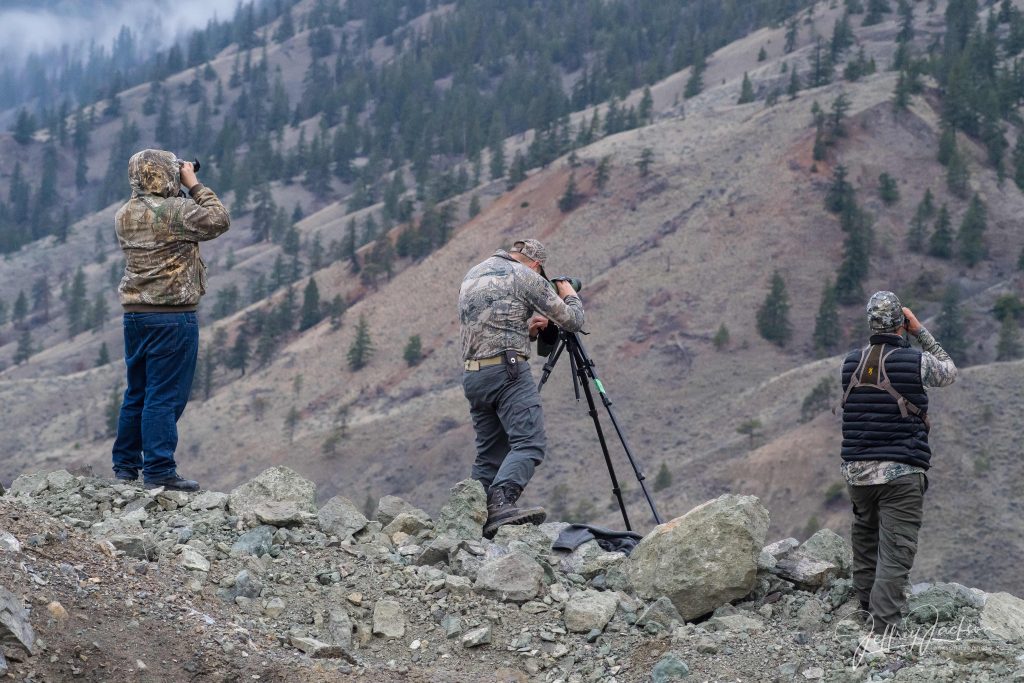 After the counting was finished the volunteers met up at the Log Cabin Pub in Spences Bridge for refreshments, food and to swap stories about what they saw on the landscape and how their past hunting season went. Tall tales, tips, and tricks were exchanged as the veteran sheep hunters shared their knowledge over a cold one. After an hour of socializing, people slowly started to trickle out, heading for home. 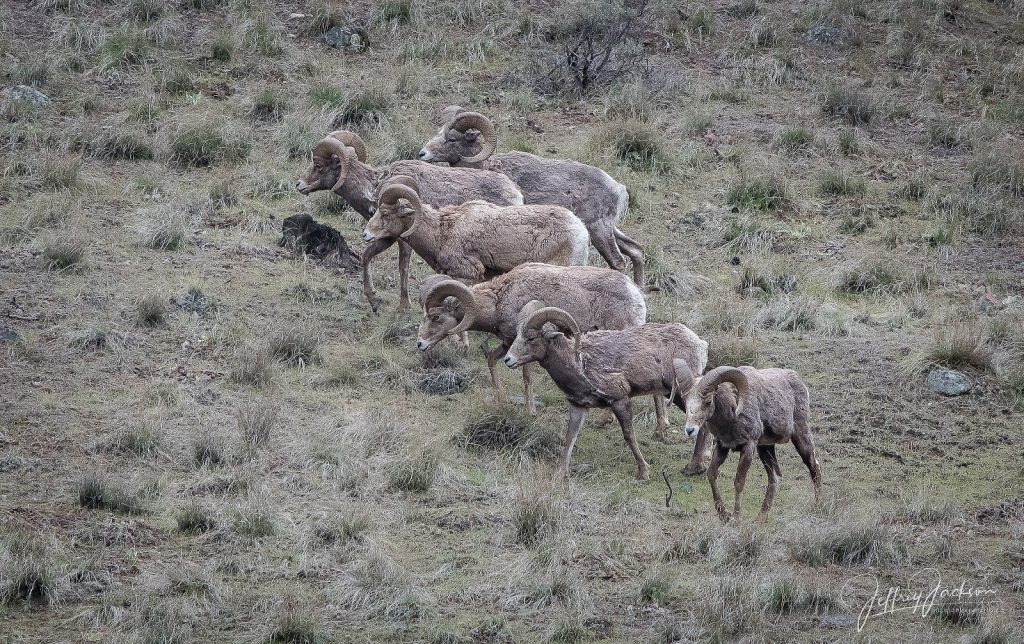 An important topic of discussion at the pub revolved around who found the big rams or located the most rams, which is always important for bragging rights. However, it is the ewes and lambs which are the important factors in determining the health and vitality of the sheep population. While the overall population numbers give a snapshot of the population size at the moment, the lambs per 100 ewes ratio and the lamb survivability are the most important factors for predicting how the population dynamics will change in the future. The scientific data suggests that while genetics play a role in the size of rams, nutrition and health of the mother play a larger role in how big a ram can grow. Strong mothers produce the largest sons. The conservation goals should focus on healthy ewes to produce more mature rams. 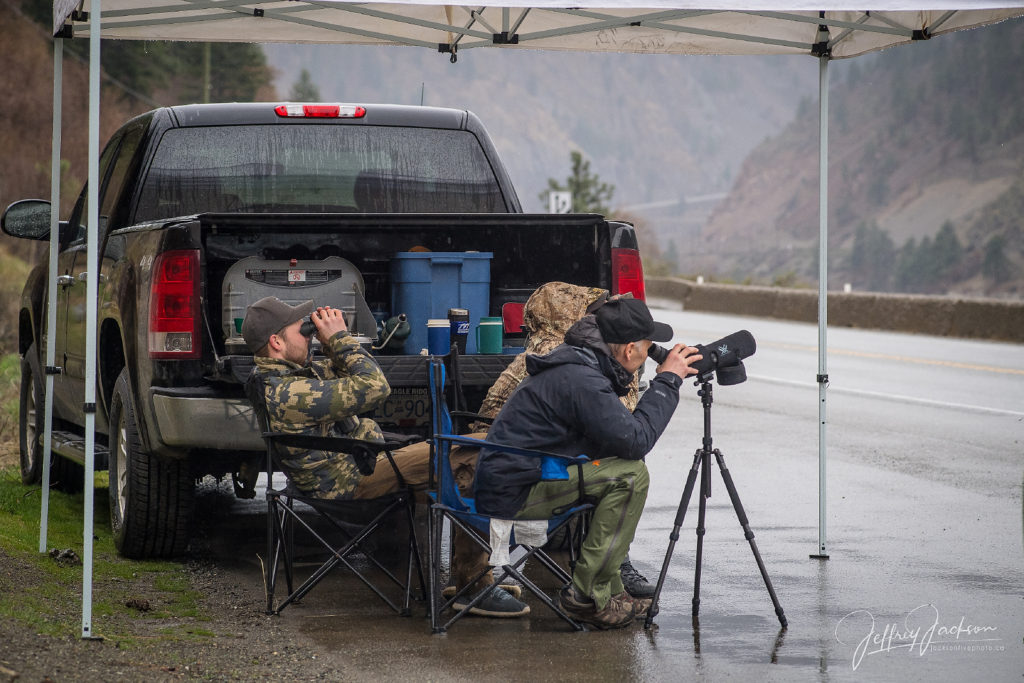 Poor lamb survival appears to be a common factor in the declines of bighorn sheep herds throughout their range. In many cases the underlying causes of low recruitment are unclear. The long-term data set from these counts for population trends, sex-age class ratios, and survivability are incredibly valuable for informing sustainable wildlife management strategies. 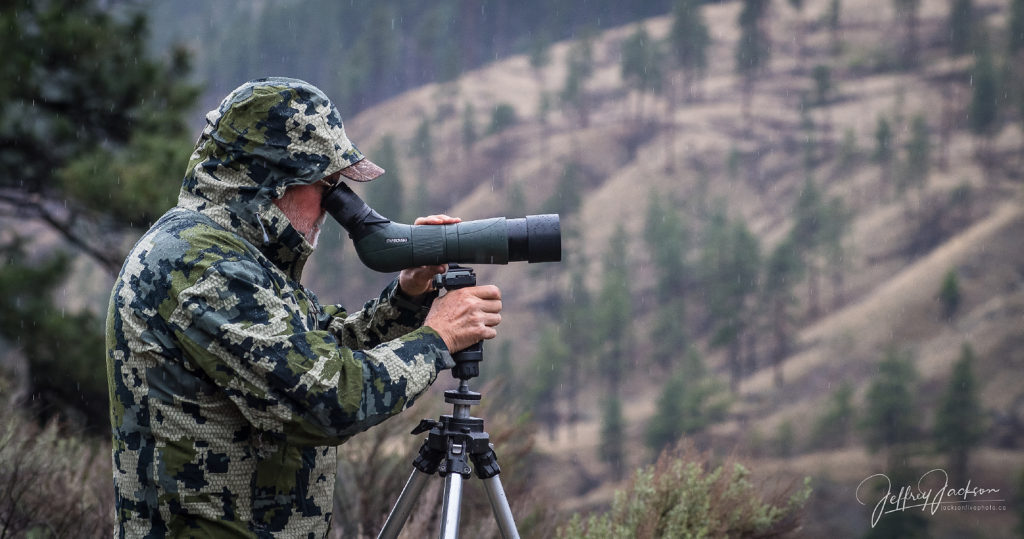 By all accounts, the volunteers had a good time, and only a few groups were unable to locate sheep. Next year’s counts are tentatively scheduled for April 6, 2019. Thanks to all the volunteers, many of which travelled long distances, for braving the elements and providing valuable information on the bighorn sheep population. A special thanks to Brady Woods for once again co-organizing the event, with over 70 volunteers we had double the volunteers compared to last year’s event. 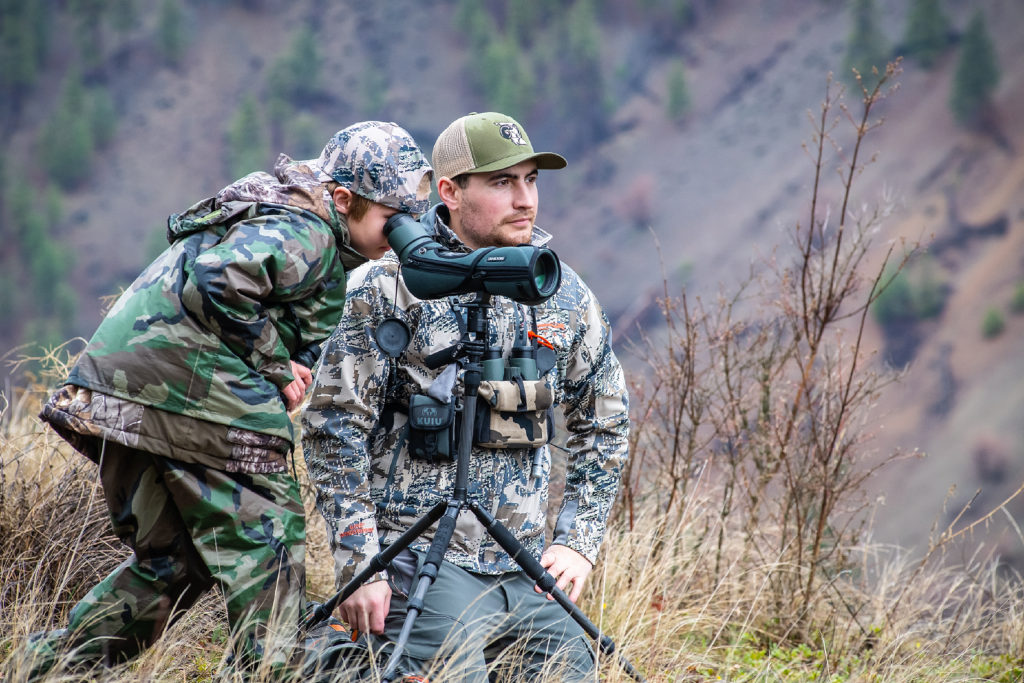